Science of the Saints, 17 April, Our Venerable Father Simeon of Persia 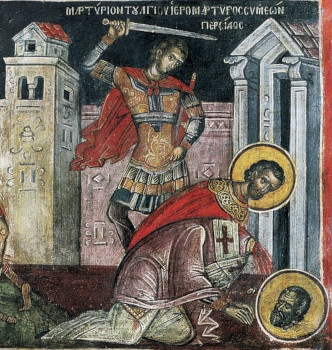 The Hieromartyr Simeon, Bishop of Persia, suffered during the time of a persecution against Christians under the Persian emperor Sapor II (310-381). He was the bishop of Seleucia – Xeziphon. They accused the saint of being in collaboration with the Greek realm and of subversive activities against the Persian emperor.

In the year 344 the emperor issued an edict which imposed a grievous tax upon Christians. When certain of them refused to pay it (this was fancied to be a rebellion), the emperor started a fierce persecution against Christians. They brought Saint Simeon to trial in iron fetters as a supposed enemy of the Persian realm, together with the two Priest-martyrs Habdelai and Ananios. The holy bishop would not even bow to the emperor, who asked why he would not show him the obligatory respect. The saint answered: “Earlier I did bow to thy dignity, but now, when I am led forth for this, to renounce my God and quit my faith, it doth not become me to bow to thee.”

The emperor urged him to worship the sun, and in case of refusal he threatened to wipe out Christianity in the land. But neither urgings nor threats could shake the bravely steadfast saint, and they led him off to prison. Along the way the eunuch Usphazanes, a counsellor of the emperor, caught sight of the saint. He rose up and bowed to the bishop, but the saint turned away from him in reproach that he, a former Christian, out of fear of the emperor, now worshipped the sun. The eunuch repented with all his heart, he replaced his fine attire for coarse garb, and sitting at the doors of the court, he cried out bitterly: “Woe to me, when I stand before my God, from Whom I am cut off. Here was Simeon, and he hath turned his back on me!” The emperor Sapor learned about the grief of his beloved tutor and asked him what had happened. That one said openly to the emperor, that he bitterly regretted his apostasy and would no more worship the sun, but only the One True God. The emperor was surprised at such sudden decisiveness in the old man and he flatteringly urged him not to abjure the gods whom their fathers had reverenced. But Usphazanes was unyielding, and they condemned him to death. The only request of the Martyr Usphazanes was that the city heralds report that he died not for crimes against the emperor, but for being a Christian. The emperor granted his request.

Saint Simeon also learned about the end of the Martyr Usphazanes and with tears he offered up thanks to the Lord. When they brought him a second time before the emperor, Saint Simeon again refused to worship the pagan gods and he confessed his faith in Christ. The enraged emperor gave orders, in front of the eyes of the saint, to behead all the Christians in the prison. Without fear the Christians went to execution, blessed by the sainted hierarch, and they themselves put their heads beneath the sword. Thus also was beheaded the companion of Saint Simeon, the Priest Habdelai. When the line reached down to the Priest Ananios, he suddenly trembled. Then one of the dignitaries, Saint Phusikos, a secret Christian, became frightened that Ananios would renounce Christ, and he cried out loudly: “Fear not, elder, the sight of the cutting, and thou immediately wilt see the Divine Light of our Lord Jesus Christ.” By this outburst he betrayed himself. The emperor gave orders to pluck out the tongue of Saint Phusikos and to flay the skin from him. Together with Saint Phusikos was martyred his daughter, the Martyress Askitrea. Saint Simeon went last to the executioner, and with a prayer he placed his head on the chopping-block (+13 April 344). The whole of the Paschal Week until 23 April executions continued. Also to accept a martyr’s death was Saint Azates the Eunuch, a close official to the emperor. The sources indicate that 1000 Martyrs accepted suffering, and then still another 100 or 150 more.