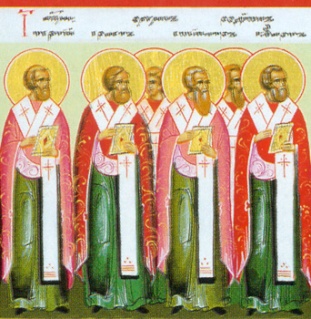 The Holy Disciples from the Seventy: Erastus, Olympas, Herodian, Sosipater, Quartus, and Tertius lived during the first century.

The holy Disciples Erastus, Sosipater, Quartus, and Tertius were disciples of the holy Apostle Paul. The Apostle to the Gentiles speaks of them in the Epistle to the Romans: “Jason and Sosipater, my kinsmen, do greet you…” (Rom. 16:21); “And also do I, Tertius, who wrote down this epistle, greet you” (Rom. 16:22); “And Erastus, the city treasurer, doth greet you, and brother Quartus” (Rom. 16:23).

The Disciple Sosipater, a native of Achaeia, was bishop of Iconium where also he died. The Disciple Erastus was at first a deacon and treasurer of the Jerusalem Church, and later on bishop at Paneadis. The holy Disciple Quartus endured much suffering for his piety and converted many pagans to Christ, dying peacefully in the dignity of bishop in the city of Beirut. The holy Disciple Tertius, having written down the dictation of the Apostle Paul contained in the Epistle to the Romans, was the second bishop of Iconium, where also he died.