Science of the Saints, 22 October, The Holy Bishop Abercius of Hieropolis, Equal to the Apostles, Wonder-worker. 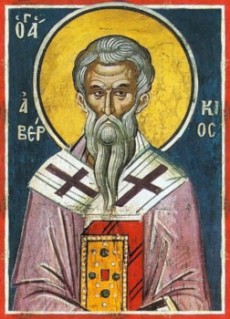 The Holy Equal-to-the-Apostles Abercius the Wonderworker, Bishop of Hieropolis, was glorified in the second century  in Phrygia.

The city of Hieropolis back then basically was inhabited by pagans. The saint prayed the Lord for the salvation of their souls and their conversion to the True Light. An Angel appeared and bid Saint Abercius to destroy the idols in the pagan temple. With zeal he fulfilled the command of God.

Upon hearing that the idol-worshippers wanted to kill him, the saint went out to the place where the people had gathered and openly he denounced the failings of the pagans. The pagans tried to seize hold of the saint. At this moment in the crowd cried out three demon-possessed youths. The people became dumbfounded, as the saint by his prayer expelled the devils from them. Seeing the youths restored to normal, the Hieropolis people besought Saint Abercius to instruct them in the Christian faith, and then they accepted Holy Baptism.

After this the saint set off to surrounding cities and villages, healing the sick and preaching the Kingdom of God. With his preaching he made the rounds of Syria, Cilicia, Mesopotamia, he visited Rome and everywhere he converted multitudes of people to Christ. Saint Abercius because of his great works is termed “Equal-to-the-Apostles.” For many years he guarded the Church against heretics, he affirmed Christians in the faith, he set the prodigal upon the righteous path, he healed the sick, and propagated the glory of Christ.