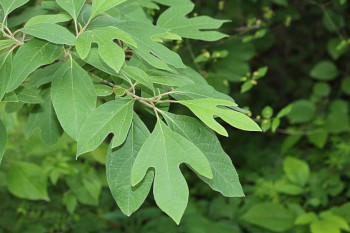 Good health was vital to the pioneer, and he went to extreme lengths to keep himself fit. When measured by present-day standards, he was not a healthy man, and he had a very limited knowledge of better health practices. However, he did have strange beliefs, antidotes, a considerable stock of remedies, and even health superstitions. Since these were all he had to guide him in the matter of health, he followed them.

As spring came each year, the pioneer began to look about for a spring tonic. This might vary from a mixture of sulphur and sorghum molasses to sassafras tea and sallet. He believed that his blood had become thick during the winter and needed to be thinned, and that his system needed cleaning out.

There were accepted ways in which these objectives could be accomplished. He could take sulphur and molasses, though this popular remedy seemed to have been reserved mostly for youngsters. Another common and less objectionable remedy was sassafras tea, which people drank in copious amounts each spring. They thought sassafras tea was an eflfective blood-thinner particularly so when made from the roots of red sassafras.

Naturally, a sufficient quantity of roots should be used to give the brew strength and color. The amount needed to produce a half-gallon of tea would be represented by ten or twelve pieces about the size and length of a finger. These were allowed to simmer long enough to bring out the best flavor. The tea was then given a minute or so to settle. Sweetened to taste, it was an agreeable drink for most persons, and also was an agreeable way to “thin the blood.”

To assure the best tea, the roots were dug in early spring while the trees were dormant; that is, before the sap had begun to rise. Some insisted that roots should be taken only from the north side of the tree. Some even held that those dug during the dark of the moon were more flavorful. All alike agreed that roots from more mature trees, three inches or more in diameter, were more aromatic. Digging sassafras in early spring became almost ritualistic. Only the rough outer bark of the roots was removed. Larger roots were split rail fashion, and diggers generally discarded the central portion of larger sections. When properly gathered and stored, roots retained their flavor for weeks. Properly brewed and allowed to settle, the tea had a most attractive rosy tint. The scent of brewing tea filled the house with a delightful odor.

A similar drink was made from the broken twigs of the spicewood bush. The writer once drank some of this tea in a home that rated it above the sassafras drink. The lingering memories of this one experience, however, are dim among the more vivid ones of sassafras brew.

Each spring now one finds small bundles of sassafras root in rubber bands on sale at grocery stores, even in nationally known chain stores and supermarkets, but something seems to be lacking. It may be that those gathering the roots do not select a sufficiently mature tree. Perhaps they are collecting white sassafras, or possibly they forget to dig only those roots north of the tree. However it may be, today’s tea hardly measures up to those memories of yesteryear. Perhaps an explanation may lie in a friend’s remark, “That boyish appetite is gone.”

Sulphur and molasses and teas from sassafras and spicewood hardly were sufficient to fully thin the blood and clean the system. A supplement of wild greens, or sallet, was necessary. This yearning of the pioneer for green food is not difficult to understand. There were no frozen foods and no fresh vegetables from the South. The first green vegetables that the pioneer could have were those that grew on the farmstead, in the fence rows, and about old fields, where the housewife went to gather sour dock, pokeberry, lamb’s quarter (generally pronounced lam-squarter), dandelion, narrowed leaf plantain, wild beets, wild lettuce, young sprouts of elderberry, wild onion, and perhaps other plants not presently popular.

Each family burned an early lettuce bed and often set out stalks of the cabbage that had been holed up in earthen mounds the previous autumn. They gathered the shoots from such sprouting stocks as well as the tops of any turnips that had survived the winter. There also would be an early planting of mustard. If newly planted beets were thinned, their tops were used. Greens thus became plentiful, but no later varieties could replace the first wild ones which were gathered as early as they appeared and cooked with a slab of fat bacon or hog jaw. Memories of these greens, supplemented with crackling bread may cause some oldsters to indulge in a bit of reverie. Some may recall the refrain of a song: “Corn bread, buttermilk, and good old greasy greens.”