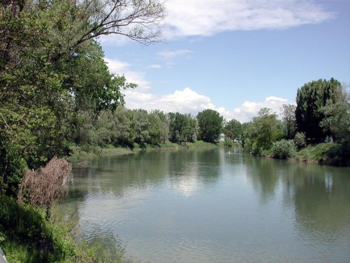 Saint Julian, Bishop of Cenomanea, was elevated to bishop by the Apostle Peter. There exists the opinion that he is one and the same person with Simon the Leper (St Mark 14:3), in Baptism receiving the name Julian.

The Apostle Peter sent Saint Julian to preach the Gospel in Gaul.

He arrived in Cenomanea (the region of the River Po in the north of present day Italy) and settled into a small hut out beyond a city (probably Cremona). He began to preach among the pagans. The idol worshippers at first listened to him with distrust, but the preaching of the saint was accompanied by great wonders. By prayer, Saint Julian healed various sick persons.

Gradually there began to flock to him a great multitude of people, asking for help. In healing bodily infirmities, Saint Julian healed also the souls, enlightening those coming to him by the light of faith in Christ.

In order to quench the thirst of his numerous visitors, Saint Julian, having prayed to the Lord, struck his staff on the ground and from that dry place there came forth a spring of water. This wonder converted many pagans to Christianity. One time the Sainted Bishop wanted to see the local prince. At the gate of the prince’s dwelling there sat a blind man on whom Saint Julian took pity, and having prayed, gave him his sight. The prince came out towards the Sainted Bishop, and having only just learned that he had worked this miracle, he fell down at the feet of the bishop, requesting Baptism. Having catechised the prince and his family, Saint Julian imposed on them a three-day fast, and then he fulfilled over them the mystery of Baptism.

On the example of the prince, the majority of his subjects also converted to Christ. The prince donated his own home to the bishop for the constructing of a temple in it and he provided the Church with means. Saint Julian fervently concerned himself with the spiritual enlightening of his flock and as before he healed the sick. Deeply affected by the grief of parents, the sainted bishop by his own prayer entreated of God the raising up of their dead children to life. The holy Bishop Julian remained long on his throne, teaching his flock the way to Heaven. The Sainted Bishop died in extreme old age in the first century. To the end of his days he preached about Christ, and he completely eradicated idol worship in the land of Cenomanea.