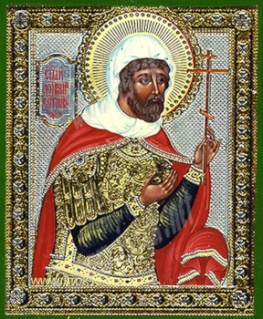 The Holy Martyr Longinus the Centurion, a Roman soldier, saw service in Judea under the command of the procurator, Pontius Pilate.

During the time of the execution of the Saviour it was the detachment of soldiers under the command of Longinus which stood watch around Golgotha, at the very foot of the holy Cross. Longinus and his soldiers were eyewitnesses of the final moments of the earthly life of the Lord, and of the great and awesome portents that appeared at His death. These events jolted the soul of the soldier. Longinus believed then in Christ and before everyone confessed that, “in truth this was the Son of God.” (Mt. 27:54). According to Church tradition, Longinus was that soldier, who with a spear pierced the side of the Crucified Saviour, and from the outflowing of blood and water received healing from an eye affliction.

After the Crucifixion and Burial of the Saviour, Longinus with his company stood watch at the Sepulchre of the Lord. Here the soldiers were given to behold the All-Radiant Resurrection of Christ. The Jews persuaded them with a bribe to bear false witness that His disciples had stolen away the Body of Christ, but Longinus and two of his comrades refused to be seduced by the Jewish gold.

Having believed in the Saviour, the soldiers accepted Baptism from the apostles and decided to forsake military service. Longinus quit Judea and set out preaching about Christ Jesus the Son of God in his native land, in Cappadocia. His two comrades also followed after him. The fiery words of actual participants of the great occurrences in Judea swayed the hearts and minds of the Cappadocians. Christianity began quickly to spread about in the city and the surrounding villages.

Having learned of this, the Jewish elders persuaded Pilate to dispatch a company of soldiers to Cappadocia, to kill Longinus and his comrades. The dispatched company of soldiers arrived in the native village of Longinus; the former centurion himself came out to meet the soldiers and took them to his home. After a meal, the soldiers told about the purpose of their arrival, not knowing that the master of the house was that very selfsame man, whom they were seeking. Then Longinus and his fellows identified themselves and asked the surprised soldiers, unperturbedly, to do their duty of military service. The soldiers wanted to set free the saints and advised them to flee, but the saints refused to do this, showing firmness of will to accept suffering for Christ.

The holy martyrs were beheaded, and their bodies were buried there where the saints made their final witness, and the cut-off heads were sent on to Pilate. Pilate gave orders to cast the martyrs on the trash-heap outside the city walls.

After a certain while a certain blind woman arrived in Jerusalem to pray at the holy places. Saint Longinus appeared to her in a dream and said that she should find his head and bury it. They led the blind woman to the rubbish heap. Having touched the head of the martyr, the woman was granted sight to her eyes. She reverently conveyed the venerable head to Cappadocia and there gave it burial.