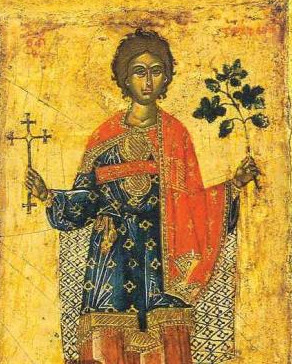 The Martyr Tryphon was born in one of the districts of Asia Minor – Phrygia, not far from the city of Apameia in the village of Kampsada. From his early years the Lord granted him the power to cast out devils and to heal various maladies. The inhabitants of his native city were once saved by him from starvation: Saint Tryphon by the power of his prayer forced back a plague of locusts that were devouring the bread grain and devastating the fields. Saint Tryphon gained particular fame by casting out a devil from the daughter of the Roman emperor Gordian (238-244). Helping everyone in distress, he asked but one fee: faith in Jesus Christ, by Whose grace he healed them.

When the emperor Decius (249-251) entered upon the imperial throne, there was a fierce persecution of Christians. A denunciation was made to the commander Akelinos that Saint Tryphon was bolding preaching faith in Christ and that he led many to Baptism. The saint was arrested and subjected to interrogation, at the time of which he fearlessly confessed his faith. They subjected him to harsh tortures: they beat at him with clubs, lacerated his body with iron hooks, they seared the wounds with fire, and led him through the city, having hammered iron nails into his feet. Saint Tryphon bravely endured all the torments, not giving out a single whimper. Finally, he was condemned to beheading with a sword. The holy martyr prayed before the execution, thanking God for strengthening him in his sufferings, and he besought of the Lord in particular to bless those who should call upon his name for help. Just as the soldiers suspended the sword over the head of the holy martyr, he placed his soul into the hands of God. This event occurred in the city of Nicea in the year 250. Christians wound the holy body of the martyr in a clean shroud and wanted to bury him in the city of Nicea, in which he suffered, but Saint Tryphon in a vision commanded them to take his body to his native land to the village of Kampsada. This was done.

Later on the relics of Saint Tryphon were transferred to Constantinople, and then to Rome.