Science of the Saints, 30 January, Hierarchs Basil the Great, Gregory the Theologian, and John Chrysostom 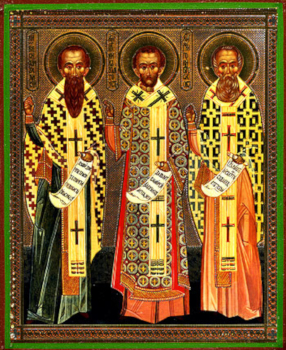 The Assemblage (Sobor, Synaxis) of the Holy Ecumenical Teachers of the Church and Sainted-Hierarchs: Basil the Great, Gregory the Theologian and John Chrysostom: This feast was instituted during the reign of Alexis I Comnenus (1081-1118).

A dispute arose in Constantinople among various prominent citizens and clergy, about which of the three Fathers Basil the Great, Gregory the Theologian, or St John Chrysostom was the greatest. In typically Byzantine fashion, the people of the City joined into the dispute, which became more animated, dividing the populace into three hostile factions styling themselves Basilians, Gregorians, and Joannites.

At last, desiring to restore peace to the City and the Church, the three holy hierarchs themselves appeared to the monk John Mauropus; they revealed to him that they stand together in harmony and in equal glory before the heavenly throne, and instructed him to compose a common service for the three of them. Saint John (Mauropus) obeyed, and chose January 30 as the date of the commemoration, since each of the three hierarchs is commemorated separately in January.