Science of the Saints, 25 January, Saint Gregory the Theologian 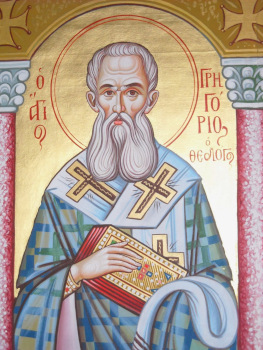 Sainted Gregory (Nazianzus) the Theologian, Archbishop of Constantinople, an ecumenical father and teacher of the Church, was born into a Christian family of eminent lineage in the year 329, at Arianzos (not far from the city of Cappadocian Nazianzus). His father, likewise a Sainted Gregory, was Bishop of Nazianzus; but of these two father and son, the son is the Saint Gregory Nazianzus encountered in Patristic theology.

His mother, Saint Nonna, prayed God for a son, having given a vow to dedicate him to the Lord. As was revealed to her in a dream, she accordingly named her first-born Gregory. When the son learned to read, his mother presented him with the Holy Scripture. Saint Gregory received a quite complete and extensive education: after working at home with his uncle Saint Amphylochius, an experienced teacher of rhetoric, he then studied in the schools of Nazianzus, Caesarea Cappadocia and Alexandria. Then for the finishing touches to his education, the saint set off to Athens.

On the way from Alexandria to Greece, during the time of a terrible storm of many days, he was apprehensive only that “the murderous waters would deprive him of the waters of cleansing.” “For twenty days and nights,” relates Saint Gregory, “I lay at the ship’s stern, beseeching the merciful God for salvation, and at this perilous time I gave a vow to dedicate myself to God, being saved through this vow.”

The saint spent six years at Athens, and there studied rhetorics, poetics, geometry, and astronomy. His teachers were the renowned pagan rhetoricians Gymorias and Proeresias. Together with Saint Gregory, there also studied there Saint Basil, the future Archbishop of Caesarea Cappadocia. Their friendship, formed while still back in school in Caesarea, flourished in a deep spiritual closeness. But their acquaintance with Julian, the future emperor (361-363) – and apostate from the Christian faith – soon turned into implacable enmity.

Upon completing his education, Saint Gregory remained for a certain while at Athens and taught the rhetoric eloquence of speech. He knew well the pre-Christian pagan philosophy and literature.

In the year 358 Saint Gregory quietly quit Athens and returned to his parents at Nazianzus. And here he at almost 30 years of age received Baptism from his father. Since now it was for him “become more significant to be a follower of God, than foremost with the emperor,” he vacillated only on which way was to be “the preference: contemplative or practical.”

At the suggestion of Saint Basil he withdrew into the wilderness, so as to asceticise alongside him.

But at the demand of his father, Saint Gregory returned to Nazianzus in 361 and received the dignity of presbyter. Sensing however, that solitude and silent prayer were immeasurably closer to his liking than pastoral activity, Saint Gregory again hastened into the wilderness to Saint Basil. There in the wilderness he strengthened in spirit, found the wherewithal to return to his flock and properly do his duty. And there soon befell Saint Gregory the hard task of reconciling the bishop with his flock, which condemned their pastor for signing an ambiguous interpretation of the dogmas of the faith. Saint Gregory gave the flock time for expression of feelings first, and then he convinced his father to openly acknowledge his mistake. After this, and uttering a sermon on the need for reconciliation, Saint Gregory accomplished his intent. Sainted Basil the Great made Saint Gregory bishop of the city of Sasima, but in order to assist his dying father, Saint Gregory remained at Nazianzus, and for a certain while after the death of his father he guided the flock of this city.

Upon the death of the Constantinople patriarch Valentus in the year 378, the Antioch Council invited Saint Gregory to help the Constantinople Church, which at this time moreso than at others was ravaged by heretics. Having received the consent of Saint Basil the Great, Saint Gregory came to Constantinople upon the Patriarchal throne. In the year 379 he began to serve and preach in a not-large house church of his kinsmen. He named this church “Anastasis” (“Voskresenie” or “Resurrection”), believing that in this small church he would begin to resurrect Orthodoxy. Heretics ruled everywhere – whether they be Arians or Appolinarians. And the more loudly resounded his preaching, the more fully increased the gathering in church, and by this more bitterly grew the opposition of the heretics. On the night of Pascha, 21 April 379, when Saint Gregory was making Baptism of the newly-illumined, a mob of armed heretics burst into the church and showered an hail of rocks upon the Orthodox, killing one bishop and wounding Saint Gregory. But the fortitude and mildness of the saint were his best armour, and his words regathered the Orthodox.

The compiled works of Saint Gregory – discourses, letters, verses – all show that he strove to be a worthy preacher of the truth of Christ. A gift of words was bestowed to him, and the saint sought to offer it in gift to God the Word: “This gift offer I up to my God, this gift I do dedicate to Him: this alone, is what I have remaining as my riches; I gave up all else at the command of the Spirit; everything that I had, I gave in exchange for the pearl of great price. Only in words do I master it, as a servant of the Word; never intentionally would I wish to disdain this wealth, I esteem it, I set value by it, I am comforted by it more, than others are comforted by all the treasures of the world. It is the companion of all my life, a good counselor and converser; a guide on the way to Heaven and a fervent co-ascetic.” In order to worthily preach the Word of God, the saint assiduously prepared and revised his works.

In five Sermons – “Discourses on Theology” – dealing with those inclined towards the verbose reasonings of Eunomius, Saint Gregory first of all gives a precise definition, who it is from whom and when that they can theologise. Only those who are experienced can properly reason about God, those successful at contemplation and, foremost of all, pure in soul and body, or in utmost measure cleansed of self. To reason about God properly is possible only for one who enters into it with fervour and reverence. Explaining that God has concealed His Essence from mankind, Saint Gregory demonstrates that “by means of flesh it is impossible to view mental objects without admixture of the corporeal.” To theologise talking about God in a positive sense is possible only when we become free from the external impressions of things and from their affects, when our guide – the mind – does not adhere to impure transitory images.

The fame of the Orthodox preacher spread through East and West. But the saint lived in the very capital just as though he lived still in the wilderness. “His food was food of the wilderness; his clothing – whatever necessary; his making of rounds was without pretense, and being in proximity of the court – he sought nothing from the court.” During a time of sickness the saint was given a shock. One whom he reckoned as his friend, the philosopher Maximus, was consecrated in place of Saint Gregory at Constantinople. Struck by the ingratitude of Maximus, the saint decided to resign the cathedra, but his faithful flock restrained him from it. The people threw the usurper out of the city. On 24 November 380 the holy emperor Theodosius arrived in the capital and, in enforcing his decree against the heretics, the chief church was returned to the Orthodox, with Saint Gregory solemnly making entrance. Soon an attempt on the life of Saint Gregory was in the offing, but the one who was to be the assassin instead appeared before the saint with tears of repentance.

In the year 381 at the Second Ecumenical Council, Saint Gregory was confirmed in the dignity of Constantinople Patriarch. Upon the death of the Antioch Patriarch Meletius, Saint Gregory presided at the Council. Hoping to reconcile the West with the East, he offered to recognise Paulinus as Antioch Patriarch. But with the arrival of those who earlier had acted against Saint Gregory on the side of Maximus – particularly Egyptian and Macedonian bishops – they did not want to acknowledge the saint as Patriarch of Constantinople. Saint Gregory decided to sacrifice himself for the peace of the Church: “Let me be as the Prophet Jonas! I was guilty for the storm, but I would sacrifice myself for the salvation of the ship. Grab hold and throw me… I was not happy when I ascended the throne, and gladly would I descend it.” Having explained to the emperor about his wish to quit the capital, Saint Gregory appeared again at the Council, in a farewell address asking it to let him depart in peace.

Upon his return to his native region, Saint Gregory concerned himself about the incursion of Appolinarian heretics into the Nazianzus flock, and he established there as bishop the pious Eulalius, while he himself withdrew into the solitude of Arianzus so dear to his heart. Not forsaking the wilderness, the saint with zeal for the truth of Christ continued to affirm Orthodoxy through his letters and verses. In the year 389 he died, on 25 January, being honoured by the Church with the title “Theologian” bestown also on that beloved disciple of Christ – the holy Evangelist and Apostle John.

The body of Saint Gregory was buried at Nazianzus. In the year 950 the holy relics were transferred to Constantinople into the church of the Holy Apostles. Later on part of the relics were transferred to Rome. Tradition has preserved the features of the saint as: “a face humble, pale, eyebrows standing up thick, a meek glance, beard not long, but thick and broad.” His contemporaries already called the archpastor a saint.