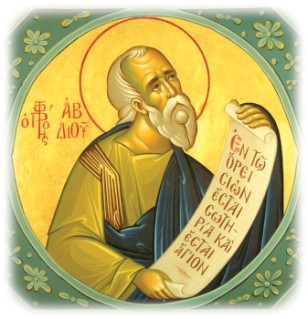 The Holy Prophet Abdias (Obadiah/Avdi) was from the Twelve Minor Prophets, and he lived during the ninth century before Christ. He was a native of the village of Betharam, near Sichem, and he served as house-governor of the impious Israelite king Ahab. In these times the whole of Israel had turned away from the True God and had begun to offer sacrifice to Baal. But Abdias in secret faithfully served the God of Abraham, Isaac, and Jacob.

When the impious and dissolute Jezebel, the wife of Ahab, set about the exterminating of all the prophets of the Lord, Abdias meanwhile in turn gave them shelter and food (III Kings 18:3ff). Ahab’s successor king Ahazias sent three detachments of soldiers to arrest the holy Prophet Elias. One of these detachments was headed by Saint Abdias. Through the prayer of Saint Elias, two of the detachments were consumed by Heavenly fire, but Saint Abdias and his detachment were spared by the Lord (IV Kings 1). From this moment Saint Abdias resigned military service and became a follower of the Prophet Elias. Afterwards he himself received the gift of prophecy. The God-inspired work of Saint Abdias – the Book of Prophecies under his name – is the fourth in order of the Books of the Twelve Minor Prophets in the Bible. It contains predictions about the New Testament Church. The holy Prophet Abdias was buried in Samaria.