Science of the Saints, 4-X (21 Sep.) St Quadratus Of The Seventy 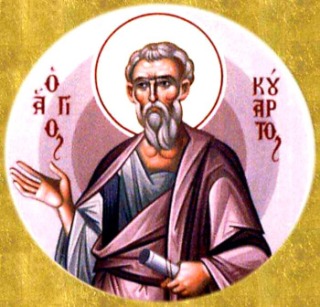 The Holy Disciple from the Seventy, Quadratus, preached the Word of God at Athens and at Magnezia (the eastern peninsula of Thessaly), and was bishop of Athens. He converted many pagans to the true faith in Christ the Saviour.

In the year 126 the Disciple Quadratus wrote an Apologia in defence of Christianity. Presented by him to the emperor Adrian (117-138), the Apologia thus affected the persecution of Christians, since the emperor issued a decree prescribing not to convict anyone without proof. This Apologia was known in the fourth century to the historian Eusebius. At the present time only part of this Apologia is known, quoted by Eusebius: “The deeds of our Saviour were always witnessed, because they were true. The healings by Him and the raisings-up from the dead were visible not only when they were healed and raised up, but always. They lived not only during the existence of the Saviour upon the earth, but they remained alive sufficiently long also after His departure; some indeed have survived to our present time.”

His preaching aroused the hatred of unswayable pagans. One time an angry mob fell upon the disciple to pelt him with stones. Preserved by God, the Disciple Quadratus remained alive, and they threw him into prison, where he died from starvation. His holy body was buried in Magnezia.